Written by admin on June 8, 2017. Posted in Uncategorized. 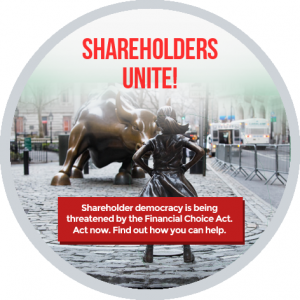 To file a shareholder resolution pressuring corporations to be more socially responsible, you need to own just $2,000 of stock in the company. Imagine, however, if you suddenly needed to own $2 billion — or even more. Shareholder activism would nearly grind to a halt. It might even get wiped out altogether.

That’s the scenario we face if the Financial Choice Act of 2017 passes Congress. Section 844(b) would get rid of the $2,000 threshold. Instead, investors would have to hold at least 1% of the issuer’s voting securities over a three-year period.

What does that mean in layperson’s terms? To file a resolution with Apple, for instance, you’d need $7.4 billion worth of stock. Filing with Wells Fargo ($2.7 billion) and AT&T ($2.5 billion) wouldn’t be chump change, either.

“It’s saying that only billionaires have good ideas,” feels Andy Behar, CEO of As You Sow, which promotes environmental and social corporate responsibility through shareholder advocacy. “All of the work [by] these small shareholders that has actually improved companies over the last seventy years — it’s saying that hasn’t been working, when it actually is incredibly well-working. The win-win scenarios that shareholders have brought to companies…there’s too many to even list. To have that suddenly become excluded would be a disservice.

Why are organizations like Business Roundtable, a lobbying group of nearly two hundred CEOs, so determined to strip these rights away? “I think they’re frightened,” observes Behar. “In the last few years, proxy access is now allowing shareholders to run board candidates. Last week Occidental Petroleum got a 67% vote on [a resolution calling for] two-degree climate scenario planning”—a landslide in a movement where getting 10-20% of the vote is often considered a major success (more details at https://www.bloomberg.com/news/articles/2017-05-12/blackrock-to-back-climate-shareholder-proposal-at-occidental). “More and more shareholders are paying attention and voting.

“The people on the board feel threatened. And what they’re threatened by is actually doing their jobs, which is to serve the shareholders in the company, who want the company to go in a different direction. They want the company to become sustainable. Companies are looking at this and going, ‘Oh, the people who we’re supposed to be working for actually care. So let’s throttle back their rights.’”

The section of the Financial Choice Act affecting shareholder rights is just a small part of the legislation. It would also roll back provisions of the 2010 Dodd-Frank Wall Street Reform and Consumer Protection Act. The Consumer Financial Protection Bureau that Senator Elizabeth Warren established would be removed, to cite just one of its alarm bells.

Nonetheless, it was passed by the House Committee on Financial Services in early May by a 34-26 vote along strict party lines. The House isn’t expected to vote on it until after Memorial Day, after which it moves on to the Senate, where activists such as Andy Behar think it’s likely to get debated.

According to Holly Testa, director of shareowner engagement at First Affirmative Financial Network, “Consensus is that this bill has no chance in the Senate, but that it will be broken into pieces to get some of it passed into law.” But even if the changes to shareholder resolution thresholds are removed from the legislation, that doesn’t mean those thresholds are protected. As Testa points out, “If Section 844 is not legislated, proponents at the Securities and Exchange Commission are likely to try to achieve its intentions through the rulemaking process.”

If the bill does reach the Senate, one next step for those opposed to the measure is approaching members of the Senate Banking Committee. First Affirmative is urging affiliated financial advisors, clients, and other contacts who have connections with those senators (listed in the box below) to get in touch to assist with outreach:

As it happens, a few of the minority members (Sherrod Brown, Elizabeth Warren, and Mark Warner) have been among the names tossed around as possible Democratic candidates in the next presidential election. They’ll have a lot of on their plate if they run, but it won’t hurt to make them aware of the issue’s importance now.

What can citizens do to make their voice heard, whether or not they have such connections? Aside from stressing your concerns to representatives in Congress (and especially the Senate), the links below offer some other resources. True, many Effective Assets clients are Bay Area-based and represented by officials likely to already be in opposition to the Financial Choice Act. So it’s important to note that if you do business in one or more Republican states or districts, your voice is likely to be heard on the issue even if you don’t live there.

As You Sow’s Choice Act: Step-By-Step Action Guide (http://www.asyousow.org/about-us/choice-act-step-by-step-action-guide) has specific info, and links to other sites, for using social media, making calls, attending town hall meetings, and joining the Indivisible group to make your feelings known about the implications of the Financial Choice Act.

A good easy first step is signing As You Sow’s petition “Protect Shareholders. Strike the Financial Choice Act 2.0,” at www.change.org/p/don-t-eliminate-my-rights-as-a-shareholder-strike-the-financial-choice-act-2-0.

5Calls has a script for callers who want their representatives to “Defend Dodd-Frank Banking Regulations” at 5calls.org/issue/recIY5BMUytUixNbV.

The Indivisible Explainer on the Financial Choice Act (www.indivisibleguide.com/resource/financial-choice-act-hr-10) also has more details on the legislation, as well as sample town hall questions about the act to ask your representatives. Indivisible also has a call script (www.indivisibleguide.com/resource/financial-choice-act-hr-10) if you contact their offices by phone.

This letter from our colleagues at Newground Social Investment provides more detail on the threat to shareholder ownership and governance rightsin the proposed legislation.

Do shareholder resolutions make a difference? Check page 3 of the Newground Social Investment letter for several examples. Shareholder resolutions were instrumental in Starbucks introducing Fair Trade coffee, for example, and DuPont making the largest land conservation gift in history. They’re crucial to making a difference, and it’s crucial to make sure they can be made by many stockholders, not just an elite few. – Richie Unterberger